You know that glorious feeling you get when you actually finish a tube of lip balm before losing it or letting it become absolutely revolting? I don’t, because I don’t think I’ve actually ever done it – BUT I do think I might have an idea of what it feels like to accomplish such a noble endeavor because, for the first time in a loooong time, I’ve finally worn something to its death.

Today I would like to mourn and honor a closet companion of mine – a pair of black velvet trousers who have been my go-to since 2016. From late, booze-fulled nights in glittery cities to attending casual meetings for my first office job, these bad boys have seen it all. Their fitted silhouette said “I’m a savvy person” while the velvet texture said, “I’m also a fun time”. Alas, a few days ago I was putting them on for work when I noticed several grey craters where the velvet had rubbed off. I knew right then and there that it was finally time to let these babies go. 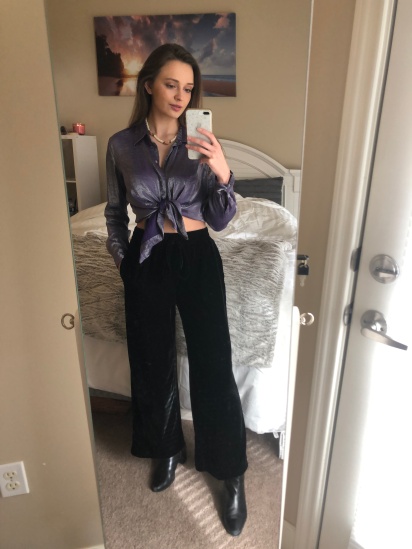 The decision kind of feels tough. The sensitive part of me wants to keep them as a monument to the good memories, but I think Marie Kondo would disapprove of that. I mean, these things are actually pretty disgusting when I take off the rose-colored lenses and while my memories with them bring me joy, the pants themselves no longer do.

However, they will not be sent to the donation bin in vain. While I’m sad to see them go, having a pair of pants that have lasted so long feels really good. I hate to admit it, but more often than not my clothes don’t make it to their death before I end up donating them. I’m trying to become better about being a more conscious and thoughtful consumer, but my style is constantly evolving so sometimes, just sometimes, that crop top I bought for clubbing 3 years ago and worn just a handful of times no longer feels very “me”. The death of these lovely pants have reminded me that investment pieces truely are fulfilling, and will hopefully reiterate the importance of conscious shopping in the future.

Below, I have shared some funny little pictures of me over the past few years wearing the pants. May they RIP.

One thought on “A Farewell To My Favorite Black Trousers”

Over the moon right now that I get to spend forever with you! Thank you so much for your warmth, silliness, patience and kindness - can’t wait for the adventures to come 💕♥️
Just a girl trying to look good and smell better
Had so much fun celebrating your 23rd birthday!!! EMMMMILYYYY! 😡😂
Was feelin’ cozy casual 👒
Kind of mad that I only just recently came to the stylistic paradigm shift that I could UNbutton this button-down dress and turn it into a duster/light jacket ... but better late than never I guess! . . . . . . . #ootd #ootdfashion #ootdinspiration #dustercoat #fashionblogger #bohemianchic #spring2020 #spring2020fashion
Wearing these lovely black trousers just one last time before I have to say farewell. These have been my favorite pair of pants over the years and I’m sad to see them go, but proud of myself for caring about something long enough to see its end. It kind of reiterates my point that long lasting clothes you will wear a ton is actually quite fulfilling. More about this on my blog along with some funny little throwbacks. . . . . . . #tbt #fashionwriter #fashionblogger #stylingtips #fashionblog #stylist
Follow Amanda Peters on WordPress.com